Simply put, my dad made me feel cherished.  Four years after his death this feeling remains. 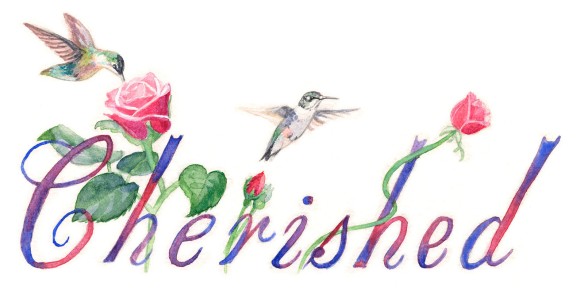 He treasured his family.  I think he actually thought all five of his children were perfect, or maybe he just treated us that way.  He lost his mother at age seven and learned early the power of family.  Shortly before his death he told my husband that life had turned out so much better than he expected.

I believe when he met and married my mom, in Japan of all places, life began again for him.

I’ve included the drawing I did after his death.  As usual art helped me to cope.  The drawing was done from a snapshot taken at his surprise 82nd birthday party.  Normally there would have been lots of photos from my own camera.  Unfortunately I landed in the hospital the night before.  When I finally arrived at the party unshowered, exhausted, and bedraggled, he looked up at me with pure joy.  As always, even at age 82 and wheelchair-bound, his strength of spirit lifted me up.

I’m so glad that I agreed to the photo because it captured how I felt toward a dad who was/is my hero.

I read this quote recently in a greeting card:

“You honor him by the way you live your life”

Welcome to my blog!

Come join me as I celebrate my last year in the “frantic fifties” and document my “Artful Passages” into my sixties and beyond.   In my artful blog/journal I’ll use writing, painting, drawing, and photographs to chart my blog-journey.

Since its my birthday and all, I deserve some cake don’t you think? In lieu of the real thing, let’s serve up a couple watercolors instead.  Lots less calories! 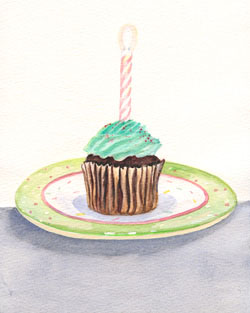 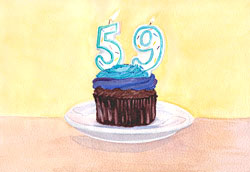 Thanks for making this passage with me!